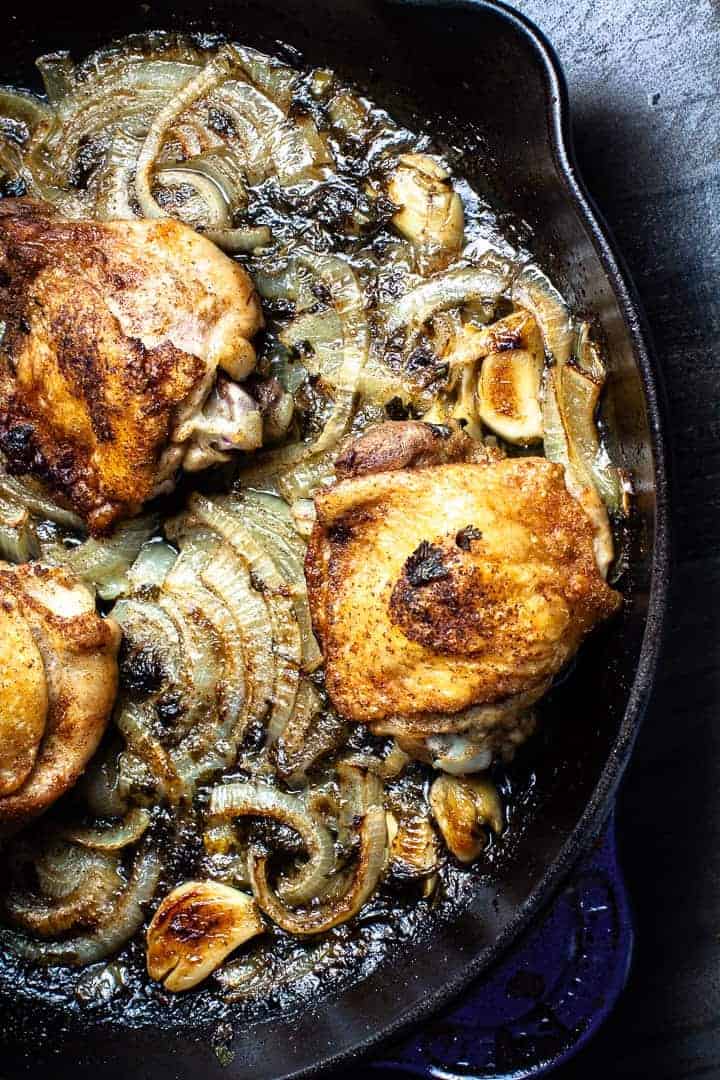 One pan chicken in a cast iron skillet is one of my favorite things to make. There are infinite versions of this just by changing up the sauce and the vegetables. I will have plenty of cast iron skillet recipes to share with you over time, so make sure to check out the ‘cast iron chicken’ tag on That Zest Life. First up is a cumin chicken version where you caramelize onion and whole garlic cloves in a cast iron skillet with the chicken and then top with chimichurri. It’s savory and bright with a nice creaminess from the whole roasted garlic.

What is Cast Iron Chicken?

Once you have the basics of this down you can pretty much make any variation that you can come up with. I’ve done a mushroom and sundried tomato with cream sauce version, and a summer corn version in the past just to give you an idea. Chicken is one of my favorite things to cook in a cast iron skillet and the best part is you can make this every single week, but give it different flavors each time. Keep your kids happy and vary up your meal prep while keeping the same basic (and cheap ingredients).

But what if I don’t have a cast iron skillet?

No worries! You can still make this using an oven safe skillet like this one from Cuisinart. However, I will say that there are really great and cheap cast iron skillets that will last your entire life so you should invest in one! Lodge makes really affordable cast iron skillets in all sizes, and I really like their 12 inch version. Personally I have a 11 & 3/4 inch Le Creuset that my grandmother gave me years ago. There are a few differences between the two. The Le Creuset has an enamel coating on the outside, which I don’t think makes a huge difference, and it is also a much smoother surface which I do prefer.

How to Make a Delicious Chimichurri

What is chimichurri made of?

Or maybe your first question is, what even is chimichurri? You can think of it like a latin version of pesto. It’s a great topping for meat because it gives you this gorgeous contrast of savory, smokey meat to bright and fresh herb blend. There are honestly a lot of ways you can make a version of chimichurri. Typically the dominant flavors are garlic, oil, and parsley. If you’re looking to make your own version start with those ingredients as your base and add in complementary flavors to the rest of your dish.

My inspiration for this dish comes from this sous vide cookbook. The version you’ll find here is done with a flank steak as a carne asada. That dish is delicious and I highly recommend it, but flank steak really isn’t my jam. I was looking for a bowl of chicken and rice with some spice and a great sauce. Plus, any time I can break out my food processor I’m excited.

My own version calls for cilantro, because it tastes very fresh to me. I wanted that freshness, an almost salsa like feel, while not being super spicy or feeling like an actual salsa. You won’t find tomatoes here. One thing you will find is a decent amount of roasted garlic and some raw shallots. While you can use raw garlic, I have found that the bite of raw garlic is just way too much for me. Roasted adds a great depth to the dish to combat the brightness of the parsley and cilantro.

No problem! Just double the parsley and use that with the chicken instead. Or swap it out basil and coat the chicken in thyme instead for a more Italian style. You could make it a bit more traditionally as well and stick to the basics: garlic, red wine vinegar, olive oil, and parsley. I don’t think you’re going to miss out on too much (especially if cilantro tastes like soap to you).

Caramelizing the Vegetables and Chicken

Personally one of my favorite parts of this dish is how beautifully the onions and garlic caramelize. It is SO simple and so beautiful. The pictures that show you the dish in the cast iron skillet are what emerges with NO stirring and NO fussing. Just make sure that you get the vegetables coated with a bit of broth and sort of submerged. But not too much or it will take ages to reduce down. If you keep the vegetable dry they will burn way before the chicken is ready. Don’t worry though! It’s pretty hard to mess up.

In terms of the chicken itself, don’t be afraid to crowd the pan with chicken thighs! I just use an entire package of thighs from the store since it’s just me which usually has 3-4 chickens in them. If yours has more, don’t worry and don’t change the recipe. Sear as normal, you just may have a harder time squeezing in vegetables.

In order to make this even easier and more perfect for a throw together meal, I not only keep packages of chicken laying around, but I also freeze my Chicken Bone Broth into 1/2 cup pucks by using a silicone muffin tin. I really like this one because you can pick it up without putting it on another surface. One the broth is frozen, pop them out into a gallon bag and then any time you want cast iron chicken it’s easy to just throw a couple of pucks into the pan! I don’t own a microwave so I don’t even defrost them. Just throw them in around the chicken right before I put the skillet in the oven. Head over to my bone broth recipe to read more about why you need to make your own!

Oops: at the time of this writing I haven’t updated the pictures, but after I had put all of the chicken from this post away and in the fridge, I realized I hadn’t added the chimichurri to the final dish! I eat all of the food I cook throughout the week so I already have WAY too much food to try it out again just for a picture! But this was heavenly so I will definitely make it again and give you the full blown meal photos 🙂 Sorry zesters!

In the meantime, I hope that you love this as much as I did. There are many more cast iron chicken dishes to come so get comfortable with this technique! It’s one of my favorites and you’re going to want to do it all the time. Comment below or show me on social media what you think! Keep living that zest life y’all! 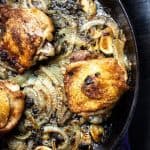 There's nothing better than a recipe that can be made nearly entirely in one pan. This Cumin Chicken is deeply savory from the cumin and roasted garlic with a light acidity from the cilantro and lime juice. This dish hits on all your taste buds, and the best part is how easy it is to get from oven to table!
Prep Time20 mins
Cook Time45 mins
Course: Main Course
Cuisine: Mexican
Keyword: baked cumin chicken, cast iron chicken, cast iron chicken thighs, chicken and rice, chimichurri chicken, cooking chicken in a cast iron skillet in the oven, cumin chicken and rice, one pan chicken
Servings: 4 servings

I typically use either fresh or roasted garlic for the chimichurri. Fresh can have a sharp bite, so roasted can be used as well. If you can’t get roasted garlic at your local grocery store, add a few extra cloves to the chicken. Once the chicken is done remove 3 garlic cloves and pulse in food processor with remaining ingredients.  This makes a lot of chimichurri! See my recipe for Chimichurri Chicken Wings for the leftovers if you have them.  If you don’t like cilantro, sub for basil and replace the cumin with thyme. Eliminate lime and replace with red wine vinegar where it calls for lime juice.

As an Amazon affiliate, I earn from qualifying purchases.

Welcome to That Zest Life!

I am here to help you take recipes that you find anywhere and make them your own and even better. Follow the recipes or read all my suggestions of what you might do to mix them up! Cooking is all about making sure it tastes good to you but it takes practice! Follow along on my journey through healthy and not so healthy eating while I live my zest life.